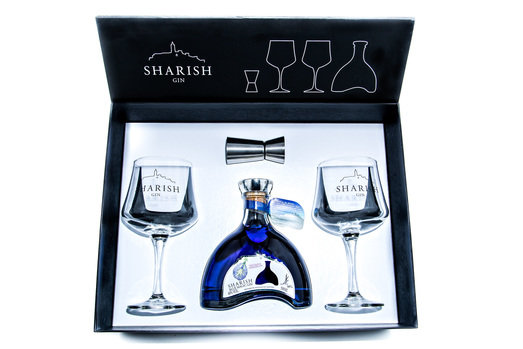 A new portuguese gin produced in Alentejo by António Cuco gets its name because of the village MONSARAZ. “Sharish” means 'xara' or 'jara', which is the Cistus ladanifer, used during the Muslim presence. So Mont Sharish means hill raised in an impenetrable amount of cistus, giving origin to the name Monsaraz.

Distilled in a traditional portuguese copper still it uses a combination of 9 botanicals carefully selected: Juniper, Cinnamon, Coriander seeds, Clove, Vanilla, Orange Peel, Lemon Peel, Bravo Esmolfe Apple PDO (Protected designation of origin) and Lemon verbena . With the particularity that the last four botanicals are used fresh. Due to the diferent characteristics and points of evaporation, the botanicals slowly distillate separately, allowing a greater quality in the final distillation. During the process, all the impurities are removed so the result is as limpid as possible.

GIN SHARISH it’s a smooth gin with a unique aroma. Very citric specialy from the orange zest and a sweet flavour from the Bravo Esmolfe Apple and from the vanilla. The juniper it’s also easy to identify considering the softer notes of cloves and coriander seeds. At the final we can taste a little spike coming from the Lemon verbena.

António Cuco and his Gin Sharish not cease to amaze and now present Sharish - Blue Magic.

Among the botanicals we can find strawberries, raspberries, cinnamon, cardamom, lemon, angelica root, ginger, licorice, coriander seeds and clear juniper. The star of this new Gin it’s a flower named Clitoria ternatea that gives the Gin a blue tone without the use of artificial coloring. According to the producer this Gin has a “magic touch” because when added to tonic water the mixture of liquids passes from blue to a light pink. This new release celebrates the first year of life of the Sharish project in the best way.