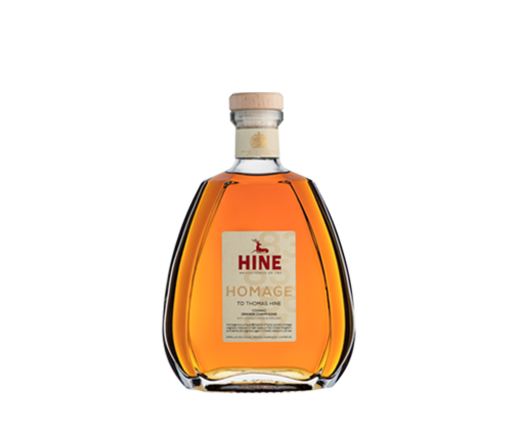 Appellation Grande Champagne Contrôlée XO
Blend of more than twenty eaux-de-vie from Grande Champagne grapes. This blend has the particularity of including 4 single vintages named “Early Landed” as they have been aged in damp British cellars until reaching full maturity.

In this tribute to Thomas Hine, adventurous Englishman landed from England in the 18th century to discover the subtleties within cognac, there is a notably uncommon je-ne-sais-quoi. Both discreet and whimsical, tangy pear and sharp orange zest rally. Mark Darcy meets Mick Jagger.

Homage quietly arises on the limestone land of Grande Champagne where it draws both tension and minerality. A two-decades journey across the Channel will then combine geographic adventure and lifelong tradition. Under the arched vaults of damp British cellars, a recital of candied citrus awakens. With it, notes of honey and fresh hazelnuts. Single vintages gently taunt each other before finding their own harmony, sheltered in their decanter. The French way of falling under the English spell.