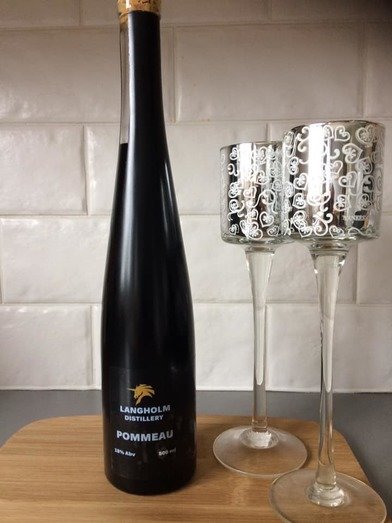 New in and from a Dumfries & Galloway supplier we are delighted to present Apple Pommeau from Langholm Distillery. A traditional aperitif in its native Normandy, a region famed for its cider and its Calvados, Pommeau is just catching on here. It’s a blend of apple brandy and unfermented apple juice, and clocks in around 16-20% - a little boozier than a wine, a lot less so than a spirit. While France, naturally enough, is Pommeau’s spiritual homeland, we’re loving this version. Light and a little tart, sweet in the manner of the juiciest apples, it’s a delight served chilled as an aperitif, but we’re really loving it in light, vibrant cocktails. Try Apple & Ginger - Apple & Ginger.. A flavour pairing with obvious appeal. We’re using spicy ginger beer, rather than ginger ale, to counter the Pommeau’s natural sweetness. Rosemary adds aromatics and dresses the drink up . If you’re a fan of Mules or Stormies, this is the drink for you. Instructions: In a tall glass with ice, combine three ounces of Pommeau and three ounces of ginger beer. Give a quick stir. Squeeze a lime wedge into the glass, and garnish with a rosemary sprig, Cider Old Fashioned cocktail - We love that Pommeau is complex enough to enjoy straight, but since it’s less than half as boozy as a standard spirit, you can drink a lot more of it. (If you’re so inclined.) Here, we’re pairing it with bourbon in a cocktail that drinks like a stiff Old Fashioned, but with a lower ABV Instructions: In a mixing glass with ice, stir together a measure of bourbon and two measures of Pommeau, along with half a measure of honey syrup that’s honey, cut 1:1 with hot water and stirred until dissolved and a dash of Angostura bitters. Stir until very well-chilled, then strain into a mixing glass with fresh ice. Garnish with a thin apple slice and an orange twist Jackie Rose Cocktail: One of the world’s truly underappreciated classics, the Jackie Rose brings together apple brandy, citrus, and grenadine - which, in its true form, is just a reduced pomegranate syrup. Since Pommeau is essentially an apple brandy, it works perfectly in this lighter Jackie Rose rendition, with pomegranate juice instead of grenadine. A true Jackie Rose can pack a stealthy punch, but you can have two of these Jackie Roses before dinner, no problem!!. Instructions: In a cocktail shaker with ice, combine two measures of Pommeau, ¾ measure of pomegranate juice , ¼ measure fresh lemon juice and ¼ measure lime juice. Shake until very well-chilled, then strain into a chilled cocktail glass. Garnish with a thin lemon wheel, thin lime wheel, and very thin apple slice.