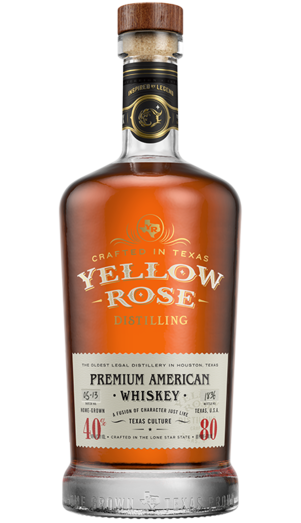 Texan whiskey blender and distiller Yellow Rose takes inspiration, as well as its name, from the Yellow Rose of Texas, a legendary character of local folklore who is said to have helped Sam Houston, a leader of the Texas Revolution, win the battle for the state’s independence from Mexico. Today, the city of Houston’s first legal whiskey distillery since Prohibition maintains that same independent approach when it comes to making its fine spirits. Yellow Rose is proud to be based in the US’s most diverse city, both in terms of culture and socioeconomics. The city also offers unique conditions for ageing whiskey, with significant temperature fluctuations contributing towards a bold and unique flavour profile. Yellow Rose was born in 2010 in Pinehurst, Texas, not far from Houston. Its founders had big dreams, with a vision to create a whiskey that its hometown could call its own. After growing success in the US over the following few years, Yellow Rose opened a larger distillery and tasting room in Houston in 2014. It’s here that its whiskeys are produced, aged and bottled. Nearly a decade since its inception, this small distillery has become a proud and established member of the Texas urban craft movement. Yellow Rose’s Premium American Whiskey, much like Texas, fuses various cultures together, blending southern charm with rustic cowboy. It’s the ideal whiskey to represent Houston, and a great entry point into Yellow Rose’s whiskeys. This whiskey is all heart, and exceedingly approachable owing to a touch of sweetness in its flavour profile. PRODUCTION: A blend of whiskeys from across the US, this is a real reflection of the American spirit. It’s full in flavour thanks to a high bourbon content in the blend, with rye and light whiskeys bringing both balance and added complexity. Every step in the crafting of Yellow Rose’s Premium American Whiskey is done entirely by hand, from fermentation and distillation, all the way to bottling and labelling. KEY INGREDIENTS: Bourbon, rye and light whiskey. HOW TO ENJOY: Pleasingly versatile and delightfully smooth, with a full, slightly sweet flavour profile, as well as a touch of spice, Premium American Whiskey is an easy drinker and is perfect for both sipping, or mixing in a variety of simple serves and cocktails. Nose: Light aroma, with fruity banana and caramel Palate: Candied Fruit Finish: Delightfully smooth with lingering banana notes.

Off-shore destinations do not qualify for free shipping due to our costs, please choose off shore and NI for the correct price.